Spring is in the air, and with it comes new creatures to the garden.  Here are a few of my favorites in the garden this month:

A couple months ago, mommy and daddy wren built a beautiful home together in the protected environment of my courtyard and inside the comfort and protection of a decorative lantern. 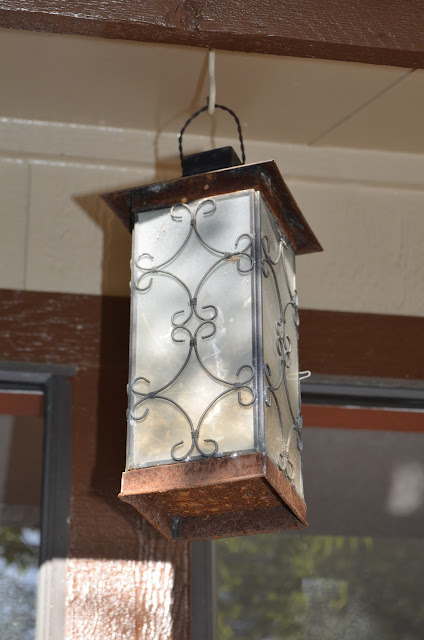 A couple of weeks later, I heard the chirps of a few little baby wrens.  A couple of weeks after that, I found the little family and fledglings hopping around the courtyard, working on getting their wings. 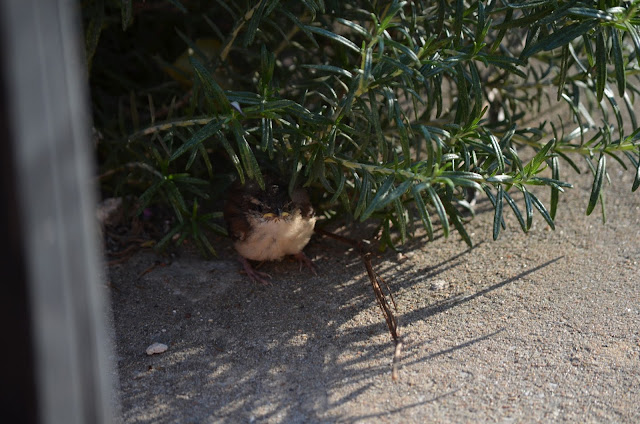 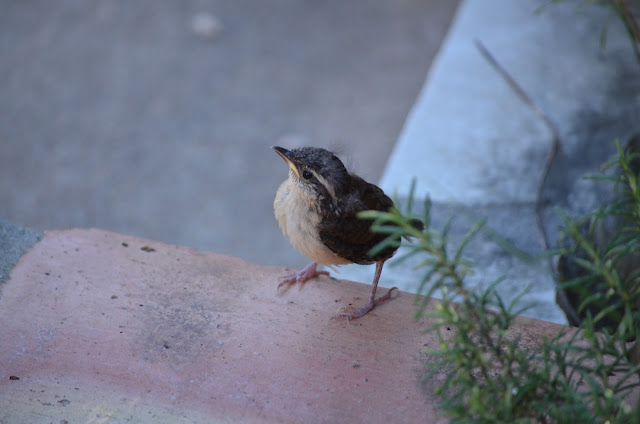 There you are!  Nice hair-do, by the way. 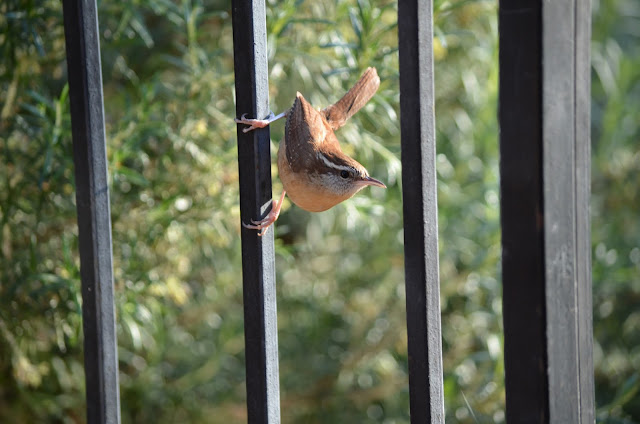 Mom (or Dad?) wasn't too sure about me.  Both parents were keeping a close eye on their little ones as they explored the garden. 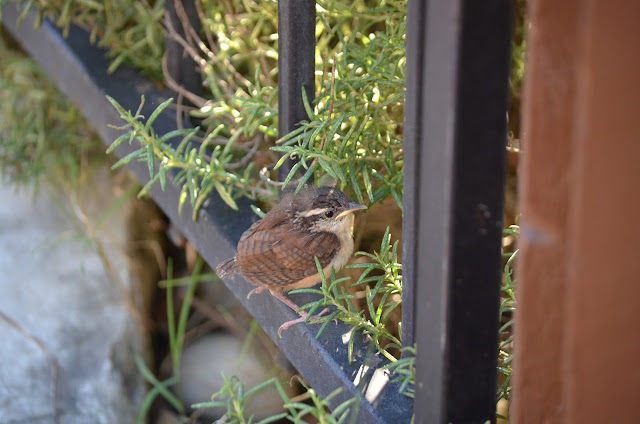 After I was sure the mommy and daddy wren had completely abandoned the nest after a few days, I went to investigate. 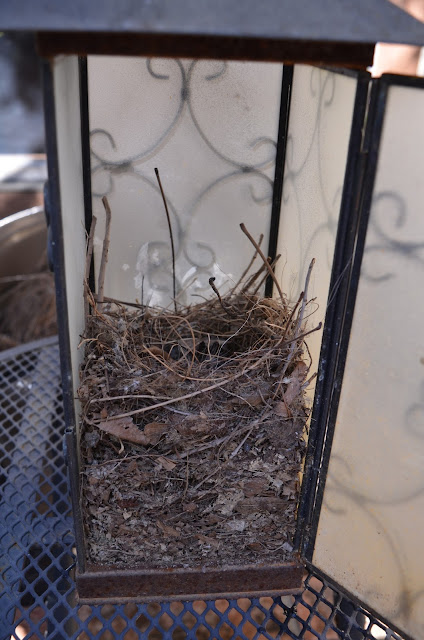 Wow - that is quite the nest!  I can only imagine the hundreds of trips back and forth that it took to create this comfy little home.  I just read that the male house wren builds SEVERAL nests, and the female picks which one she likes the best.  I guess he outdid himself on this one! 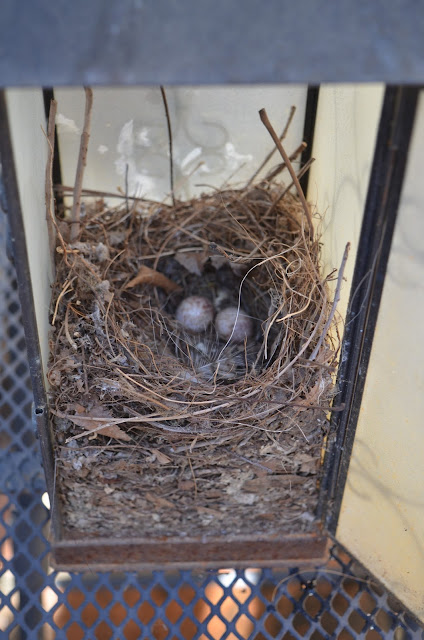 Unfortunately, it looks like two little ones didn't make it.  I guess that is why they generally lay 6-7 eggs in a brood.  Circle of life, I s'pose.

The Hummingbirds returned this year on March 15.  That's about three weeks earlier than last year (April 4).  Maybe their earlier arrival was due to the mild Texas winter, or maybe they just remembered where they found the delicious nectar last year! 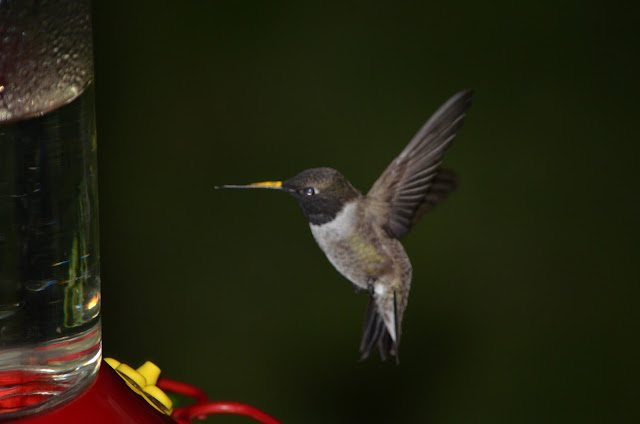 I mainly have black-chinned hummingbirds.  As you can tell with this guy's yellowed beak, the pollen is heavy right now.  Thankfully, pollen doesn't bother me, so I'm able to be outside in the garden and enjoy these little pollinators. 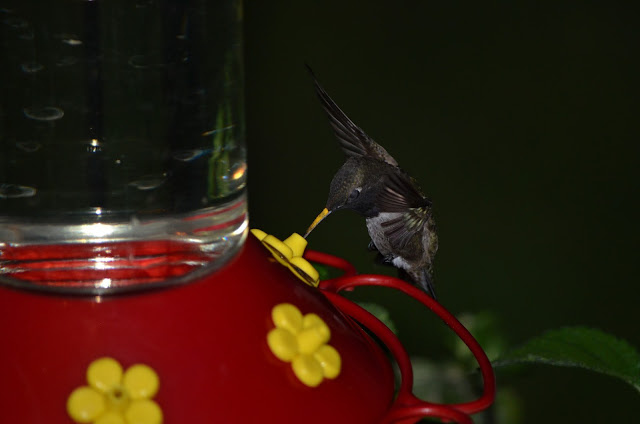 Coming in hot!  I love the iridescent purple on the male's chins! 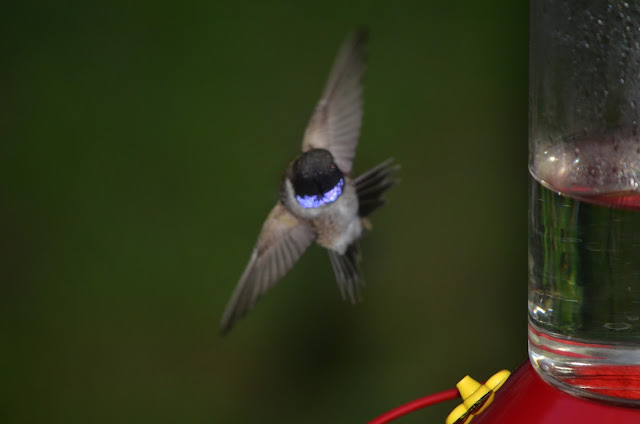 So far, I've noticed about four hummingbirds; about three males and one female.  I rarely have more than one hummer at the feeder at a time because they are extremely territorial and always chase each other away. 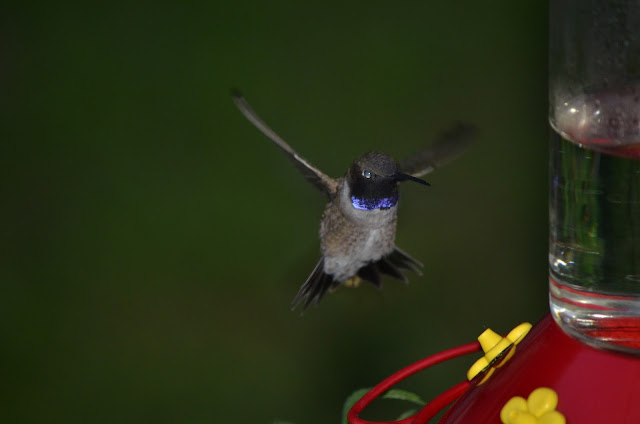 I can always hear hummingbirds before I see them.  They really do make a humming sound with their wings.  They also have a distinguishable chirping sound.  When we leave our patio door open on cooler spring evenings, I always know when the hummers are at the feeder, even when I'm inside, with their commotion of chirping and humming. 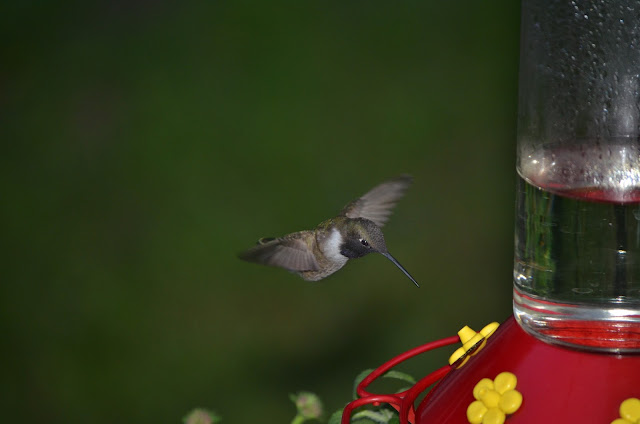 They are such magnificent little creatures!  One of my favorite animals in garden, certainly. 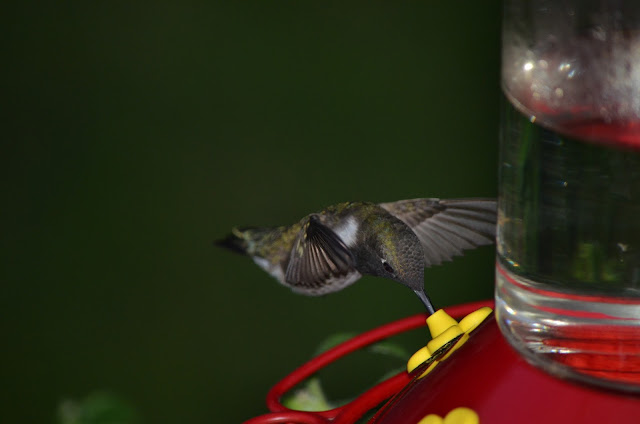 I have to give photo credit to the hubby - he is always able to get better shots of these fast little guys.  Thanks hun!

The green anoles are common to see out in the garden.  I usually spy them sunbathing every time I walk around the garden.  They have really been enjoying basking on the artichokes lately.  I think they don't mind the fact that it is pretty much an open buffet of various bugs and beetles. 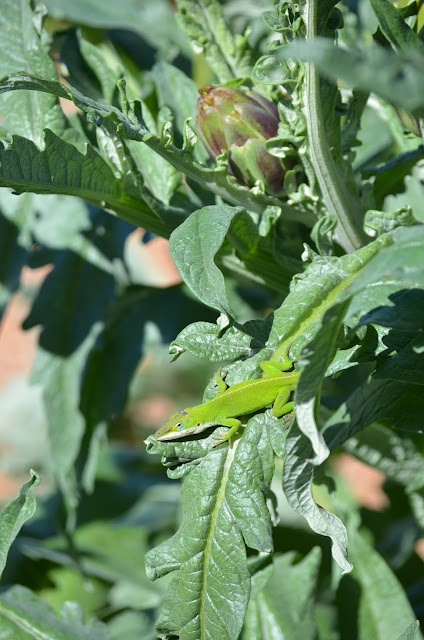 I also spy the Texas Spiny Lizard from time to time.  Here, I captured the rare occurrence of getting both the anole and the spiny lizard in the same frame. 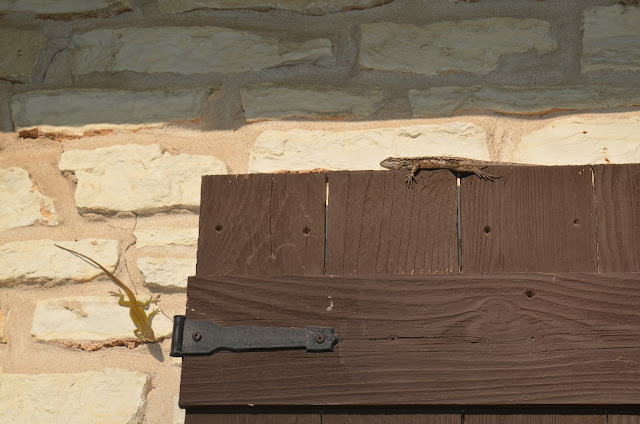 That's all for this month's wildlife.  Thanks to Tina over at My Gardener Says for hosting this enjoyable meme.

In a Vase on Monday: By Any Other Name

It has been six months since my last gardening post.  I've been doing plenty of gardening in that time, but just not documenting it. I don't want to forget about how my garden grows over the years, or all the wonderful things that come from it, so I figured it was about time to get back in the swing of things...and what better way than with some beautiful bouquets! 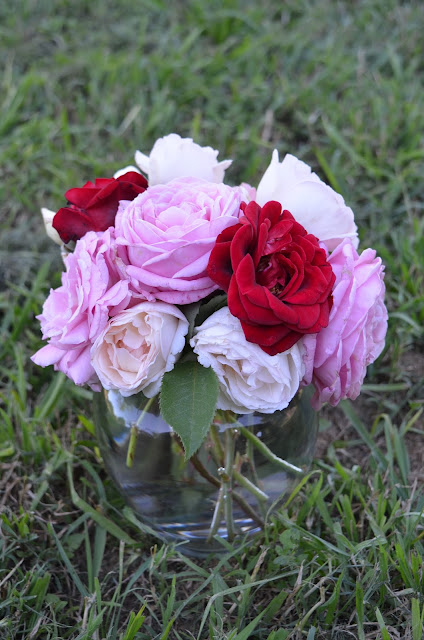 The roses are blooming like crazy already.  We had a very mild winter in Central Texas, so the roses have had an early start.  I have so many roses in the garden right now, that this week's vases are made up entirely of roses! 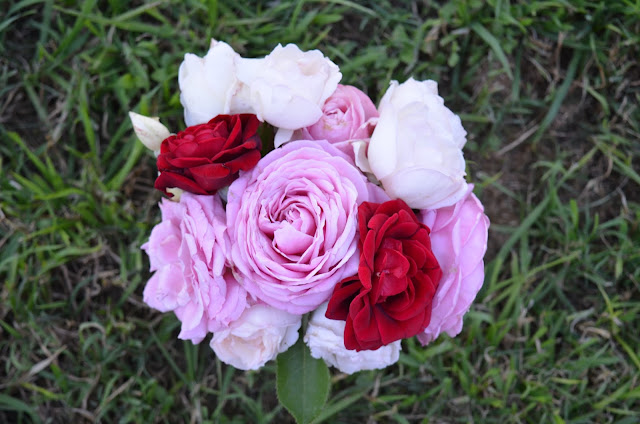 Vase #1 is a combo of Belinda's Dream (pink), Madame Joseph Schwartz (white), and a mystery red rose that was a pass-along from a gardening friend. 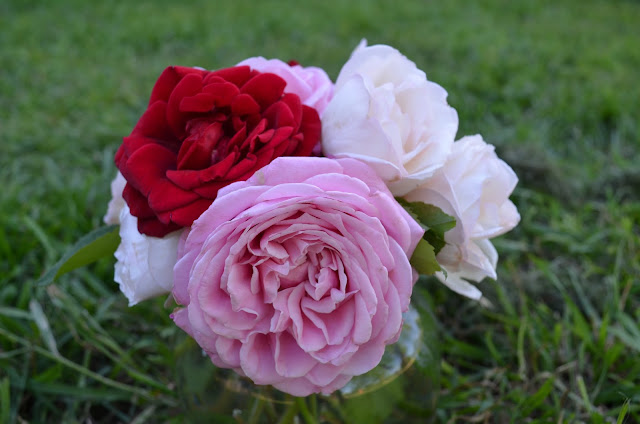 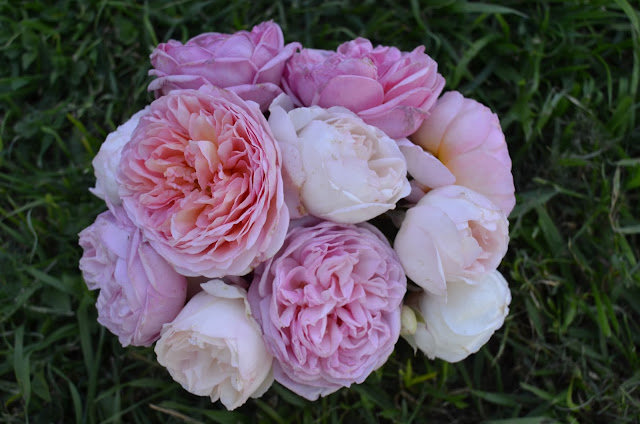 Vase #2 includes more Madame Joseph Schwartz (white), some Mrs. B. R. Cant (pink), and one of my favorite roses in my garden - Abraham Darby (pinkish apricot). 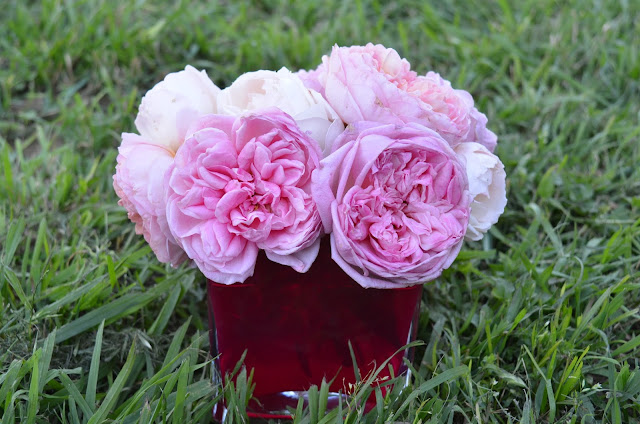 I love the old-time look of these antique roses. 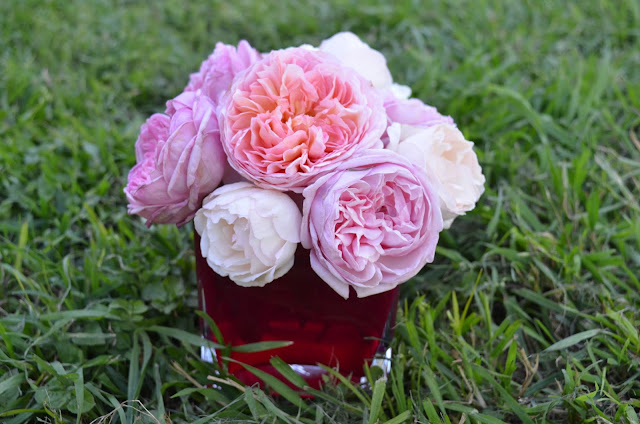 Not only is the color magnificent on the Abraham Darby, but the smell is intoxicating with it's fruity tones. 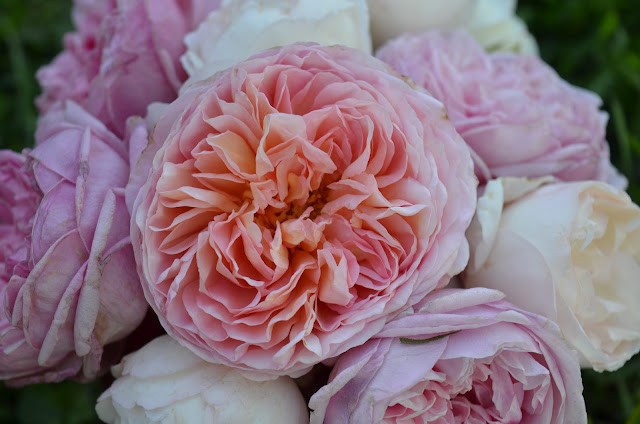 Thanks to Cathy over at Rambling in the Garden for hosting this fun meme!
Posted by Unknown at 8:25 PM 9 comments:

Email ThisBlogThis!Share to TwitterShare to FacebookShare to Pinterest
Labels: In a Vase on Monday
Newer Posts Older Posts Home
Subscribe to: Posts (Atom)